Americans overwhelmingly see drug addiction as a problem in their local community, regardless of whether they live in an urban, suburban or rural area, according to a new Pew Research Center survey. The public’s concerns come amid steep increases in the number and rate of fatal drug overdoses across all three community types in recent years. 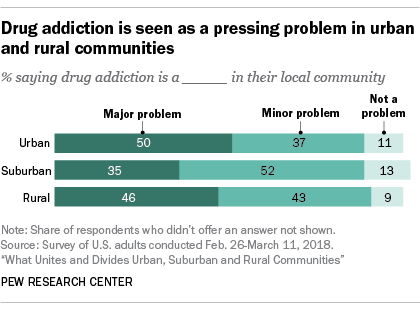 Nine-in-ten Americans who live in a rural area say drug addiction is either a major or minor problem in their community, as do 87% in urban and 86% in suburban areas, according to the survey of 6,251 adults, conducted Feb. 26-March 11. Substantial shares in each community type say addiction is a major problem, though people in urban and rural areas are more likely to say this than those in a suburban setting (50% and 46%, respectively, compared with 35%).

The problem of drug addiction has drawn widespread attention as the United States confronts an opioid epidemic. President Donald Trump last year declared the epidemic a national public health emergency, and statistics from the Centers for Disease Control and Prevention underscore the deadly toll that opioids and other drugs have taken.

Nationally, more than 63,600 people died of a drug overdose in 2016, the most recent year for which full data are available. (Preliminary data suggest the 2017 number will be even higher.) That’s an increase of 21% from the prior year and nearly double the 34,425 drug overdose deaths that occurred a decade earlier. Opioids – ranging from illegal street drugs like heroin to prescription painkillers – have played an especially lethal role: About two-thirds (66%) of the fatal overdoses in 2016 involved an opioid. 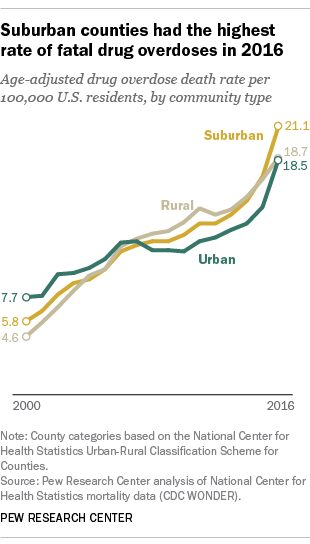 Urban, suburban and rural counties all have experienced significant growth in deadly drug overdoses, according to the CDC. There were 19,172 fatal overdoses in urban counties in 2016, up 25% from the year before. Suburban counties experienced 36,424 such deaths, up 22%, while rural counties saw 8,036 deaths, up 9%. (This analysis uses the National Center for Health Statistics county classification scheme to assign each county to a community type. Pew Research Center used the same approach in its analysis of demographic and economic trends in the new study about American community types. Also, it’s important to point out that not all fatal overdoses are the result of drug addiction. The CDC notes that overdose deaths can have other causes, such as inadvertently taking the wrong drug.) 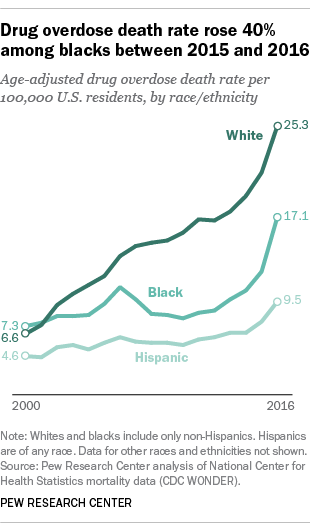 In the Center’s new survey, about half of blacks (49%) say drug addiction is a major problem where they live, as do 45% of Hispanics and 40% of whites. Majorities of eight-in-ten or more across the three groups say this is at least a minor problem in their community.