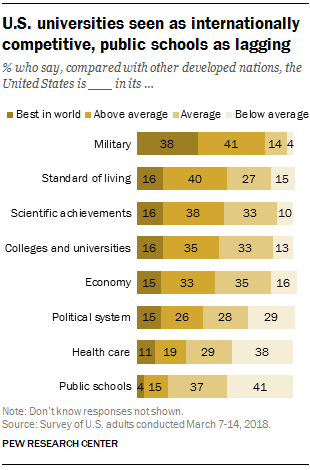 Americans say their nation’s colleges and universities compare relatively well with those in other developed countries – but the public offers more negative assessments of the state of U.S. public schools.

About half of U.S. adults say the country’s colleges and universities are either the “best in the world” (16%) or “above average” (35%) compared with those in other developed nations, according to a recent Pew Research Center report. By comparison, just 18% say U.S. public schools rank above average or higher internationally, while 41% of Americans say public schools are below average (37% rate them as average).

On many measures of how the United States fares relative to other countries, Republicans are more likely than Democrats to view the nation as performing better. This extends to views of the country’s public schools. 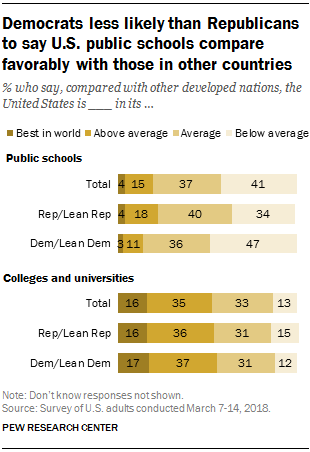 Liberal Democrats offer particularly critical evaluations of the nation’s public schools relative to those in other countries, with 56% saying U.S. public schools are below average (compared with 38% of conservatives and moderates in the party).

Notably, there are no partisan or ideological gaps in evaluations of American colleges and universities. Roughly half of Democrats and Democratic leaners (54%) and a similar share of Republicans and Republican leaners (51%) say U.S. postsecondary institutions are above average or the best in the world.

Although there is not a significant partisan gap in views of how American higher education compares with that of other countries, previous research by the Center has shown that Democrats are considerably more likely than Republicans to say colleges and universities have a positive effect on the country – and GOP views have shifted more negative over the past few years. 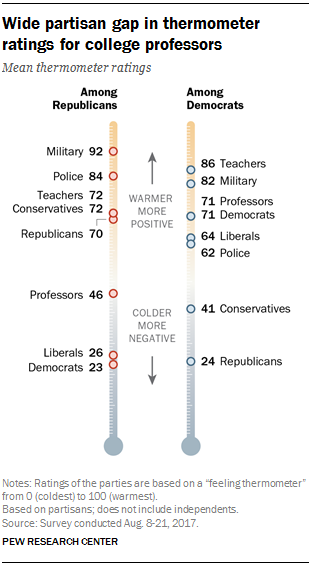