C.S. Lewis had sharp words for those he called “moral busybodies.” These are the sort of people who assume they know the best medicine for others and are eager to administer it, even by force. “Those who torment us for our own good,” wrote Lewis, “will torment us without end, for they do so with the approval of their conscience.”

As a California native who, after years away, returned to the Golden State last year, I find myself on the receiving end of Governor Newsom’s latest COVID prescription. Depending on where you are, you may be thinking I shouldn’t complain. I disagree. You may well have it worse, but as much as we dislike complaining, this is one of those times when we need to speak up.

According to California’s new “Blueprint for a Safer Economy,” counties are assigned to one of four tiers based upon the assessed health risk to residents. Color codes make the whole thing look pretty. At a quick glance, it might even seem reasonable: higher risk means tighter restrictions; lower risk means looser restrictions. Sure.

But when you examine the details, the whole thing starts to take on a scary, dystopian flavor.

Most disturbingly, Newsom has avoided a green-light, all-is-well, you-can-resume-your-lives tier altogether. It’s not there. Normal just vanished in a poof of political smoke! As he put it: “We don’t believe that there is a green light, which says go back to the way things were or back to the pre-pandemic mindset.”

I’m not nit-picking about colors here. Governor Newsom is actually using his elected powers to prevent the people who elected him from resuming their lives as normal. In order for a county to qualify for gold-tier status in the Golden State, it must have fewer than one new COVID-19 case per day per hundred thousand residents on a sustained basis, and less than 2% of tests must come back positive.

Newsom’s tiers are based entirely on cases and test results, as though being found to have COVID-19 were a death sentence. As we all know by now, it isn’t.

I’ll challenge the reasonableness of these criteria in a moment. First, let’s consider what Newsom has in mind for these “minimal risk” counties. How close will he let them come to life as usual?

Not very close. According to the official document, places of worship, movie theaters, restaurants, gyms and fitness centers are all restricted to 50% of capacity, and professional sports can’t have live audiences. This permanent purgatory is the best-case scenario! No path to normal! After half a year of crippling burden, Newsom wants this to be the sustained level of burden even in counties where there’s no sign of the virus.

No one should stand for this.

Comparably disturbing is the fact that both swab tests and antibody tests for COVID-19 have reported false positive rates in excess of the declared 2%-positives criterion. The rate of false positives for the swab test can be as high as 5%, and for the antibody test it has been reported to be 4%. This means that virus-free California counties can expect to fail Newsom’s gold standard simply because the tests aren’t accurate enough to let them pass!

What makes all of this more painful is that there isn’t actually a virus threat that calls for such extreme measures in the first place. Newsom’s tiers are based entirely on cases and test results, as though being found to have COVID-19 were a death sentence. As we all know by now, it isn’t.Please Support The Stream: Equipping Christians to Think Clearly About the Political, Economic and Moral Issues of Our Day.

Because most people who get COVID-19 do just fine (many don’t even know they have it), the actual threat to public health ought to be assessed not by case counts but by the frequency of hospitalizations and deaths. By these metrics, the general population of California has no cause for alarm. The number of COVID patients in intensive care units per hundred thousand residents is down to around three, having peaked at around six in late July. With hospital stays averaging around a week, this means that for every hundred thousand Californians, fewer than one per day is being admitted to an ICU because of COVID-19, on average. 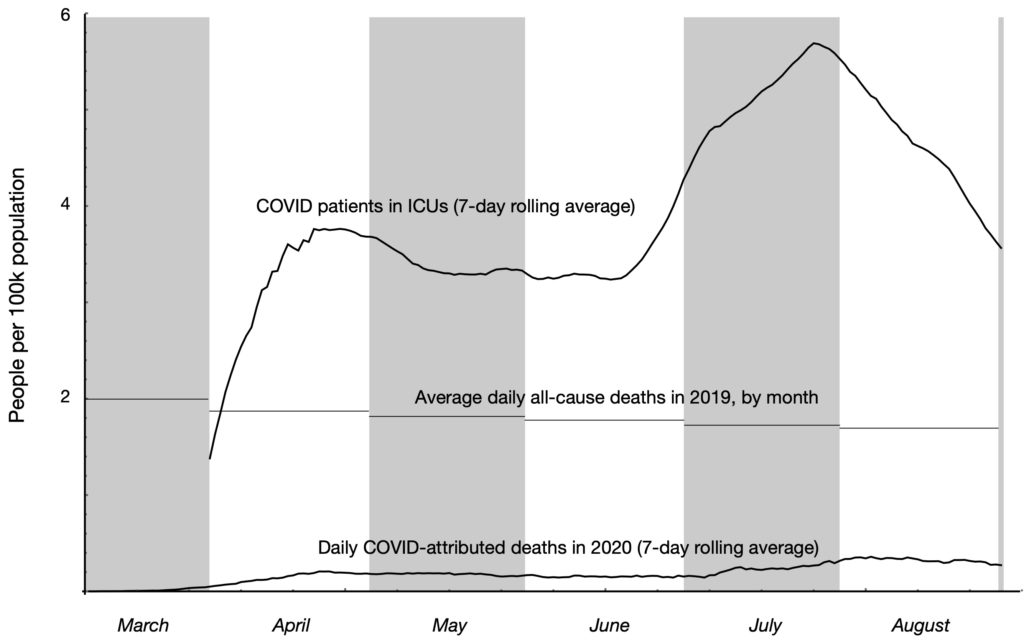 And in a state where about two of every hundred thousand residents die on a normal day, the number of daily deaths being attributed to COVID-19 is down to about 0.25 per hundred thousand — and falling. Add to this picture the fact that these deaths are mostly among elderly people in poor health, and the cause for panic evaporates. People are dying because that’s what happens to us all, eventually. A fraction of these people are dying with complications from respiratory disease because, again, that’s what happens to us, eventually.

Think the Restrictions are Tolerable? You’re Missing the Point

The cause for alarm here is not the virus but the misuse of political power.

The press is equally guilty for stirring fear where there is no cause for it. They switched their obsession from deaths to cases as soon as it became hard to scare people with rapidly dropping death rates. And they consistently focus on individual tragic cases, which are indeed tragic, while neglecting the big picture.

This isn’t about masks or restaurants. It’s about government intrusion. It’s about moral busybodies with the power to impose their view of how things ought to be on people who have no say in the matter.

People I respect have taken the view that we should tolerate these measures as the “new normal.” But they’re missing the point. This isn’t about masks or restaurants. It’s about government intrusion. It’s about moral busybodies with the power to impose their view of how things ought to be on people who have no say in the matter. This is about the emergency loophole that has suddenly turned so many governors and mayors into tyrants.

It doesn’t take much imagination, or much reading of history, to see how this new mode of governance could go very badly wrong in a hurry. Land of the free? Not if this government overreach continues.