For the first time since 1950, the U.S. Census Bureau is planning to ask everyone living in the United States whether they are citizens when it conducts its next decennial census in 2020. Anticipating that some immigrants might avoid answering the question, the Trump administration wants to try using other government records to fill in missing responses.

The new question would be included at the Justice Department’s request, according to a memo by Wilbur Ross, secretary of the Commerce Department (which oversees the Census Bureau). It would supply block-level data on the citizen and noncitizen voting age population.

The Justice Department sought to include the question because it uses data about eligible voters – the citizen voting-age population – to help enforce protections for minority voters (including those who speak languages other than English) under the federal Voting Rights Act. The Justice Department now relies on data from the Census Bureau’s American Community Survey, a sample survey that covers 2.6% of the population each year. The department wants more “scope, detail and certainty” that only the full census can provide to enforce the Voting Rights Act, Ross said. 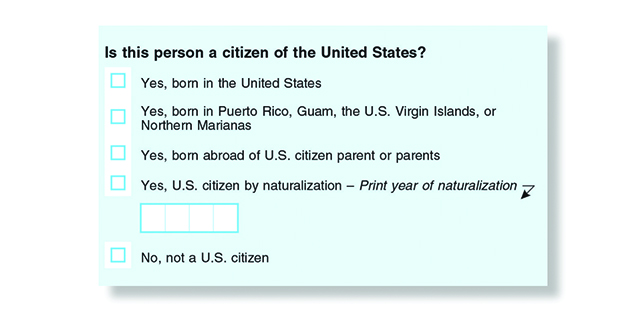 Ross said the census form would use the same wording as what is already used in the Census Bureau’s American Community Survey, which asks respondents to check one of five categories to describe their citizenship status. Three categories apply to people who are U.S. citizens at birth: born in the U.S., born in a U.S. territory, or born abroad with at least one U.S. citizen parent. People who say they are a naturalized U.S. citizen are asked for their naturalization year. The fifth category is “not a U.S. citizen.” The survey does not ask whether noncitizens are legally in the country.

The citizenship question is included in the list of census questions that the Census Bureau sent to Congress this week. But the new question’s inclusion has been challenged in court on the grounds that it could cause many immigrants to skip the 2020 census out of fear their information could be used against them, even though it is illegal to share a person’s census responses with law enforcement or immigration agencies.

A lawsuit by California Attorney General Xavier Becerra contends that if the census undercounted immigrants, it would be an incomplete population count that violates its constitutional purpose, which is to divide up seats in the U.S. House of Representatives based on the total U.S. population. (Census numbers also are used to allocate billions of dollars in federal funds.) The California lawsuit also says the Trump administration failed to follow government procedures for adding questions to the decennial census form.

If immigrants shun the census, it could reduce the number of congressional seats and the amount of federal funding in states with large numbers of foreign-born residents, such as California, which has more than any other state. Many of these states are dominated by Democratic leaders and elected officials, who have taken the lead in pressing the issue. But an undercount also could affect Republican-dominated states such as Florida and Texas. More broadly, social scientists say that if immigrants avoid the national headcount, the census results will be flawed, hurting health and social science research.

The California lawsuit quoted a 2017 Census Bureau memo that reported a recent rise in immigrants’ fears about the confidentiality of their personal information in surveys and focus groups, with some citing Trump administration actions intended to reduce unauthorized immigration. But the Ross memo says there is no “definitive, empirical support” for the claim that putting a citizenship question on the 2020 census would reduce response rates. The memo quoted data on the share of people who did not answer the question on the American Community Survey, including 11.6% to 12.3% of Hispanic respondents in 2013-2016, but it said there were “similar nonresponse rate ranges” for other questions on that survey.

However, the Ross memo acknowledged that many noncitizens do give incorrect answers to the citizenship question. Quoting a Census Bureau analysis, it said that among noncitizens whose responses to census questions about their citizenship status could be matched with other government records about them, about 30% erroneously said they were citizens.

Ross said the citizenship question will be the last one on the form, in order to “minimize any impact on decennial census response rates.”

He also ordered the bureau to make it a priority to acquire other federal and state government records that it could use to fill in missing responses to the citizenship question. The bureau already fills in missing data about people in the census using a statistical technique called “imputation,” relying on information about neighboring households. In the 2010 census, imputation added more than a million people to the household population, and it filled in missing data about age, sex and race for even more people.

The bureau is already studying how to use government records, such as Social Security or Internal Revenue Service files, to fill in missing data from people who do not turn in their 2020 census forms or answer specific questions on the form. There are some obstacles, though: Government records themselves can include errors and do not cover the entire population.

The Ross memo states that he would like the Census Bureau to compare individual census responses with individual government records to determine “the inaccurate response rate for citizens and non-citizens alike using the entire population.” That would enable the bureau to establish “the accurate ratio of citizen to non-citizen responses to impute for that small percentage of cases where it is necessary to do so.”

The Census Bureau’s acting director, Ron Jarmin, told an advisory committee this week that the agency would conduct a survey of 50,000 households, as well as 42 focus groups, examining attitudes about the privacy and confidentiality of census data.

Citizenship asked in the past

A citizenship question was asked in each decennial census of the total population from 1890 to 1950. (The 1820, 1830 and 1870 census questionnaires also included some form of a question about citizenship.) Until 1920, it was only asked of adult men; women and children automatically had the same citizenship status as their husbands or fathers. The question was not asked in the 1960 census. Since then, the citizenship question has been asked of only a sample of households, either on the census long form or the American Community Survey, which replaced it in 2010. 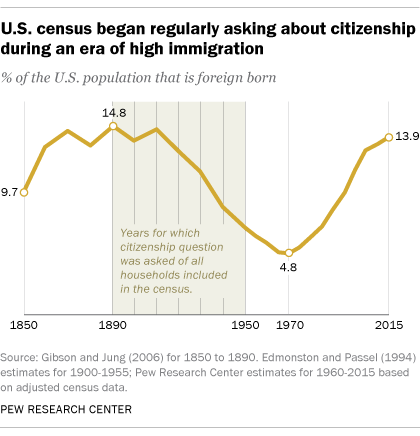 The government’s interest in asking about citizenship coincided with a rise in immigration to the U.S., ultimately peaking at nearly 15% of the population in the late 1800s and early 1900s. Immigration slowed sharply after restrictions were enacted in the 1920s, to less than 5% of the population in 1970. The removal of the citizenship question from census questions asked of all households came as the Census Bureau reduced the number of questions asked of all households and began asking more questions – including citizenship – of a sample of the population. Beginning in 1970, most people filled out their own census forms, rather than having census-takers fill out the information about them.